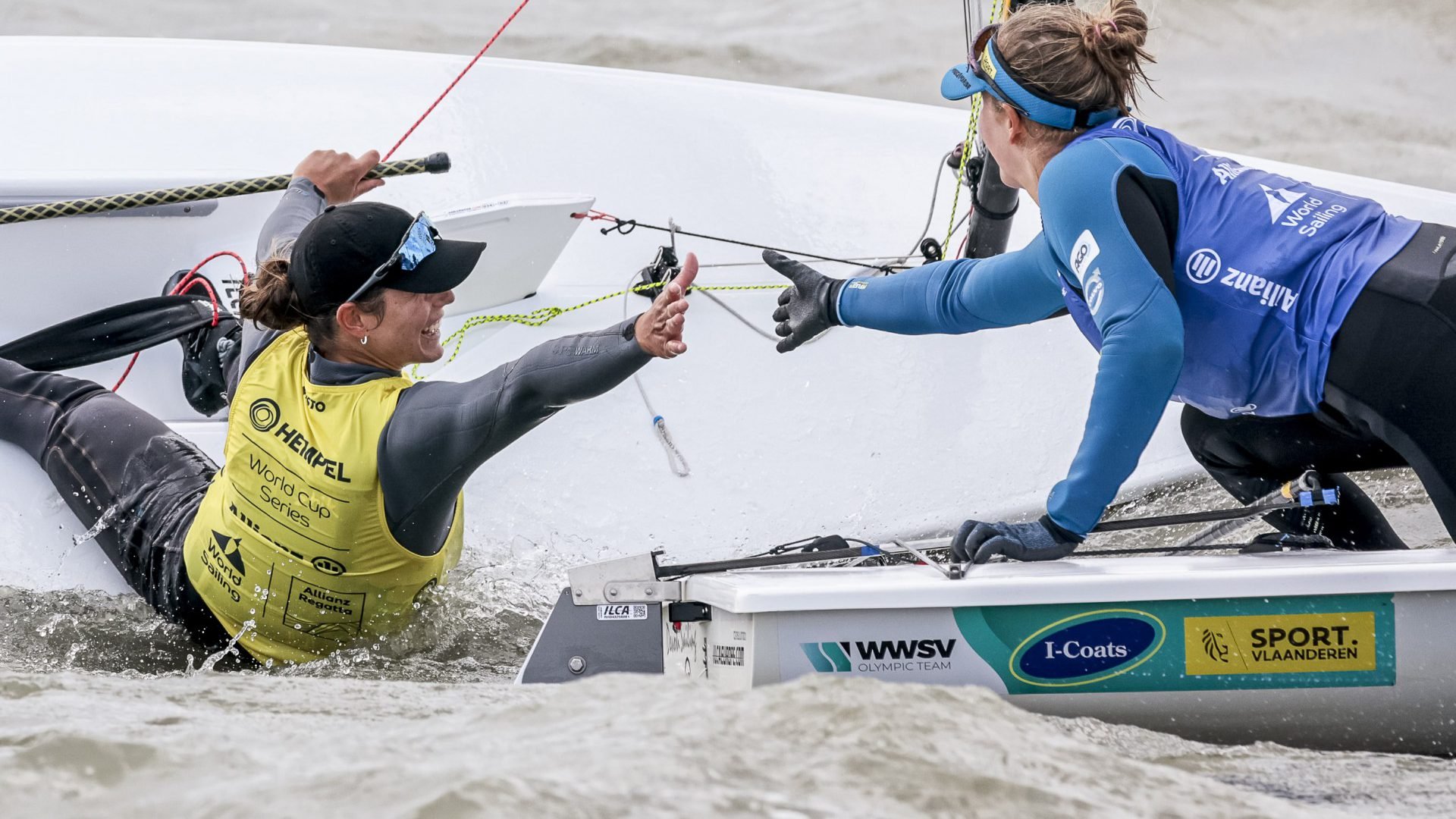 Team Allianz sailors accounted for three gold medals at the Hempel World Cup at the Allianz Regatta on June 4. Bart Lambriex and Floris van de Werken were already sure of the gold in the 49er skiff class on the second to last day. Odile van Aanholt and Annette Duetz still had to work very hard in their medal race to keep their Belgian competitors off them, which they succeeded in doing. Catamaran sailors Laila van der Meer and Bjarne Bouwer win the medal race and also take the gold in the Nacra17.

Odile van Aanholt and Annette Duetz formally form a team since last week on their way to Paris 2024. This spring, the duo already won the strong World Cup race in Palma de Mallorca and then also took the top prize at their home race in Almere. But they still had to fight for it.

Annette Duetz: “It was a very exciting race. We fought hard, we really had to work hard because we made a mistake at the start. But it went really well and we were able to sail on the shifts (in the right rhythm with the wind changes ed.). In the end, we crossed the finish line just behind the Belgian.”

Odile van Aanholt: “We are secretly very happy and yet quite relieved. Yet another exciting medal race with lots of wind and waves. We like that. Very nice to race in the Netherlands with many good top teams there. Furthermore, the week was a bit difficult regarding the wind. But also learned a lot of good points. We have to do our starts a little better. And we notice that we are not quite on top of each other yet when we have to make quick decisions. Then we need a little more communication. So good points to take into the future.”

“This week was mainly a speed race. It was all about speed. We did have a good field in itself with international boats. I think we missed the top six in the world here, but the rest were actually there. We learned a lot and we’re doing quite well and we were also one of the fastest in the fleet and that’s really where you can make the difference, with speed.”

And how do you connect with the Italians, the people who dominate the class now?
“I guess just putting in more hours, training more, getting better, getting faster. That’s just a fact that those others have a lot more experience. They’ve been in this catamaran for super long and we’re just coming in. But this is our second World Cup win, that does feel good.”

Medal races June 5
On Sunday, June 5, four more medal series are scheduled in Lelystad for the men’s and women’s windfoilers and kitefoilers. In both new Olympic classes, the Dutch are leading and both disciplines use an innovative format for the all-important series of medal races.

Huig-Jan Tak as leader to iQFOiL medal series
Huig-Jan Tak takes over the lead from Max Castelein on the penultimate day. In third place is Joost Vink.

The athletes in position four through ten race against each other in the quarter-finals; the first two of these advance to the semi-finals against the windfoilers who finished second and third overall. The best two of these semi-finals take on the leader of the standings to determine the final color of the medal.

In other words, Huig-Jan Tak as leader in the standings has a ‘bye’ until the decisive final and is already sure of a medal. Max Castelein can still finish fourth but can certainly take the gold and that also applies to Joost Vink.

Formula kite format medal series
In the women’s competition, Annelous Lammerts is still in the lead and has a very good week. On June 5 she will go into the medals series as the classification leader and that has its advantages.

In other words Annelous Lammerts, leader of the rankings, only needs to win one race to claim the gold.