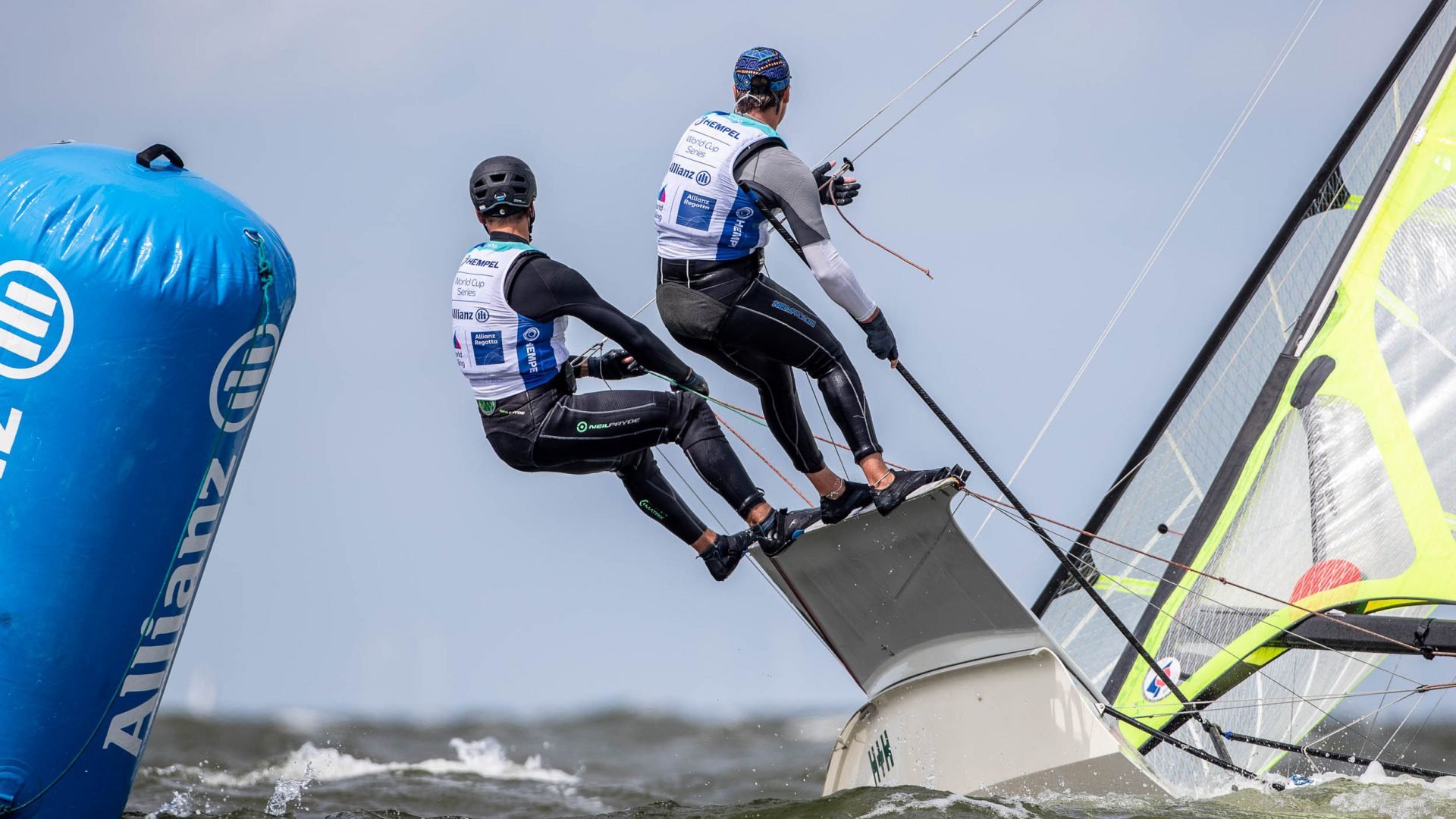 The Medal Race line-ups in the 49er and 49erFX classes at the Hempel World Cup Series – Allianz Regatta were confirmed today, ahead of tomorrow’s final day of racing.

Both fleets faced one of their toughest tests of the regatta, as the wind was at its strongest so far this week.

With a late change to the leaders in the 49er fleet, and points tight in both classes, no medals have been confirmed just yet and it’s all to play for in the Medal Races.

Out on the racecourse, a building breeze reached as high as 18 knots with a stronger chop compared to earlier in the week, while still retaining a typical Medemblik offshore shift.

And it was the German team of Jakob Meggendorfer and Andreas Spranger who dealt with the conditions the best, racking up two wins and a second place to lead the fleet overall.

They knock Tokyo 2020-bound duo Bart Lambriex and Pim van Vugt (NED) off top spot in the 49er fleet after a 12-race series – albeit only by two points to set up a tasty affair in tomorrow’s Medal Race.

“It was fun racing, there was good wind, and I think it was the first day of strong winds in this regatta, so we are pretty happy with our results,” said Meggendorfer.

“It was quite light at the beginning of the week and sometimes we had to wait quite a long time for breeze,” added Spranger.

“Most of the time it was pretty tricky offshore conditions, and now we finally got some breeze, so it was good to stretch the legs.

“This is our first competition in almost a year. We didn’t know before where we were in the fleet, so it’s nice to see that training paid off and that we can keep up with the others.”

Lucas Rual and Emile Amoros, selected by France for Tokyo 2020, sit third, five points from the Dutch team and 12 ahead of compatriots Erwan Fischer & Clément Pequin.

Finishing their final day of fleet racing with a 1-4-(6) scoreline, the Dutch duo are 11 points ahead of Marla Bergmann & Hanna Wille (GER) in second.

Mathematically, there are six teams in with a shot at a podium place in the 49erFX, with Great Britain, Italy and Poland all represented in the Medal Race.

A difficult day for British pair Isabelle Fellows & Alice Masterman saw them drop from third to fifth, but with only four points between them and current third-placed team Odile van Aanholt & Emma Siewers (NED), the outcome from tomorrow is still very much in their hands.

“It was a pretty tough day, with different conditions to what we’ve had so far this week – there was quite a difficult chop to deal with, which made it quite tricky,” explained Fellows.

“Everyone is very up and down, and comes up from one corner and then the other corner,” added Masterman.

“I think everyone is probably pretty evenly-matched, so it’s been really tough just to get round other boats.

“If you make one mistake, you could fall back quite a bit.”

Asked what they were aiming to do tomorrow to try and get back into the top three, Masterman replied enthusiastically, “Win the Medal Race; give it everything we’ve got!”

Racing at the Hempel World Cup Series – Allianz Regatta concludes on Sunday 13 June with the Medal Races in the 49er and 49erFX.

Those not qualified for the Medal Races will also compete in one final fleet race.