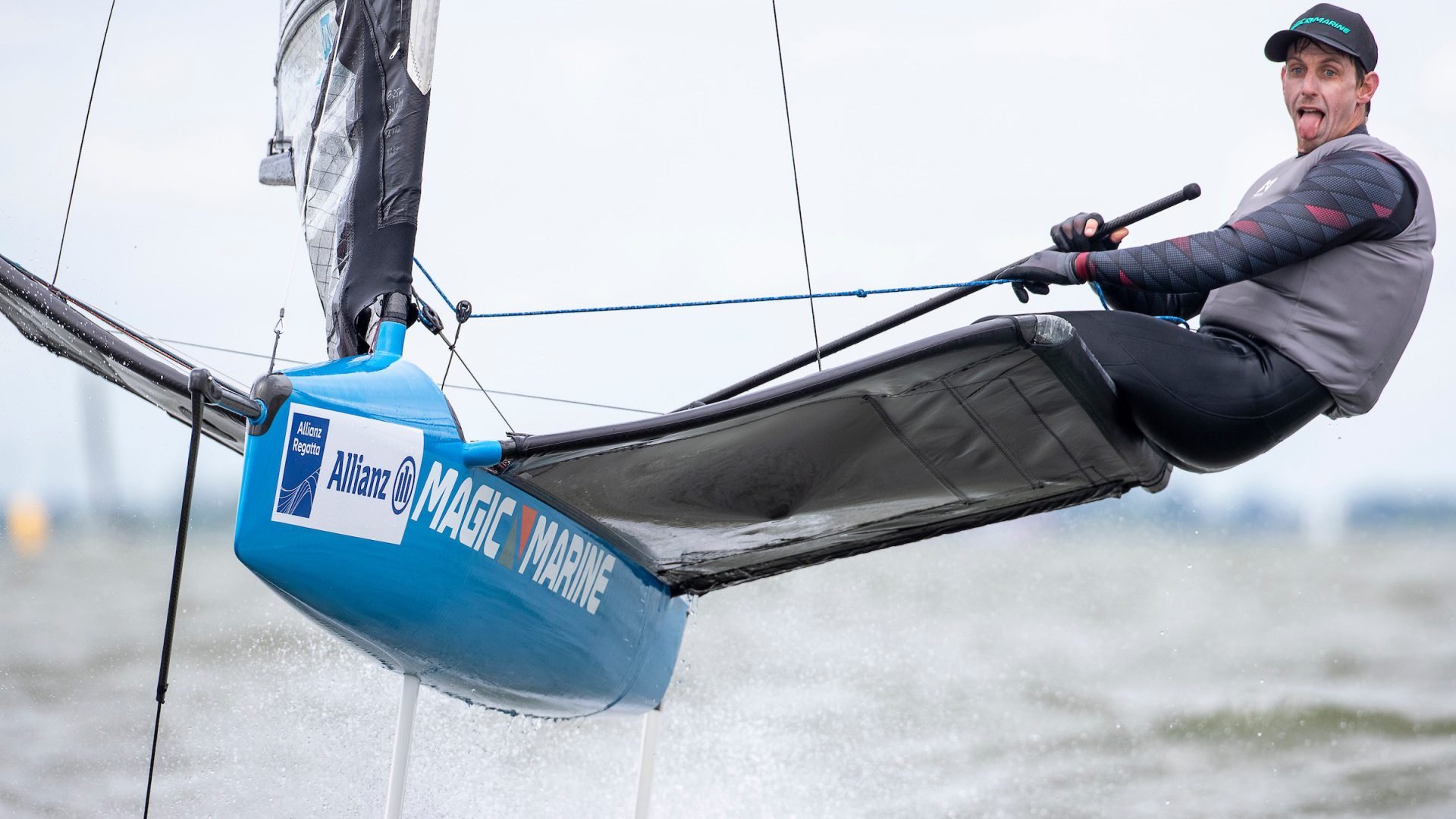 At the Open Dutch Sailing Championships this weekend, Nicholas Heiner and Jaap Zielhuis will compete against each other in the Moth class. Last year, Zielhuis was Heiner’s coach during his Olympic campaign in the Finn. This weekend they are more likely to be each other’s rivals. How do they see this themselves?

Jaap is already on time at the boat park to check his boat. There was quite a bit of wind the day before. “It really was a triathlon yesterday, swimming, flying and sailing! So now just checking how everything looks for today.” Of the 10 competitors in the Moth, only four were able to sail some results. The other Moth sailors had to go to shore because of damage, or they stayed on shore because of high winds.

Coaching each other
As soon as Nicholas is also preparing his boat, Jaap joins him. The sailors start sparring with each other about whether or not to sand the foils. “Which sandpaper would be best, the Nacra uses this grit, but of course the Moth is much lighter.” So there is some back and forth between the two.

“Look, he’s still coach though!” Says Nicholas as Jaap continues to observe his boat. Details are straightened out by Jaap. But the other way around, Nicholas also comes to Jaap with tips. The bond between the two is perhaps only further strengthened by going out on the water together. “Yesterday at least!” They are referring to their many swims a day earlier.

Even this last day of racing we see them swimming together regularly, as well as the rest of the Moth crew this weekend. “In this class there is not that much competition,” Jaap indicates. “We all suck at it, and it shows because we are all swimming somewhere. So we have to help each other to get better. In that respect, nothing has changed at all in the relationship between Nicholas and me, except that Nic coaches me from time to time. But that was no different before.”

Nicholas remains a true racer
The two of them are just joking around like two old friends. But then coach Jaap comes to speak: “It’s funny, because you see, even in this class, that Nic continues to race. Even if it is a big swim, as soon as there is less wind he wins. He keeps having a good start and stays on the track pretty neatly, while we are shooting in all directions.”

Nicholas responds soberly, “I’ve been racing for 20 years, in all those years I’ve learned that from so many different coaches. Then the last year I worked a bit more intensively with Jaap, he teaches me just a bit different things than other coaches. Every coach has a different way of doing things. Racing is just experience, you see that Kalle (Coster, ed.) and Jaap also raced week in, week out for years. But they stopped really racing years ago, I only last year.”

Learning to sail again and putting in hours
Jaap and Kalle have also both sailed Olympic campaigns. Now these three former Olympic sailors are finding each other again in the Moth class. Jaap: “The difference with Olympic sailing is that you try to go faster on that last percent. Now with Moth sailing we start again at the bottom 20 percent, it’s really just learning to sail again.”

Nicholas notices this as well, and does see rapid progression. “I started in the Moth four months ago now, back then I was going down every jibe. Now I managed to stay upright, even in these conditions. It’s fun to learn new things and new skills this way. Just like any boat, you have to put time into it to sail it right.”

So the fact that the sailors both still need to put time into it was evident this weekend. Nicholas suspects that we will see them sailing together again on the Braassem, but ‘coach’ Jaap has already come up with another plan. “We did learn here that waves are important. So it will probably be something in the direction of Medemblik.”

The bigger ambition
So the ambitions of both are to get better at foiling, for Nicholas this is in line with his vision: a Dutch team in the Sail GP. What about Jaap’s ambitions in the Moth?

“I want to learn how to foil and learn how such a boat works. Personally, because it’s fun to learn new things. But also as a coach. These days you have to, otherwise you could be looking for another job in ten years’ time. Sailing is moving in that direction, I just want to understand what it’s all about when those foiling sailors talk about the handling and shapes of foils.”

Nicholas: “And of course you have to become a coach in the Sail GP, so then you have to.”

Jaap: “Yeah, it would be dull if I don’t even know how foiling works then…”