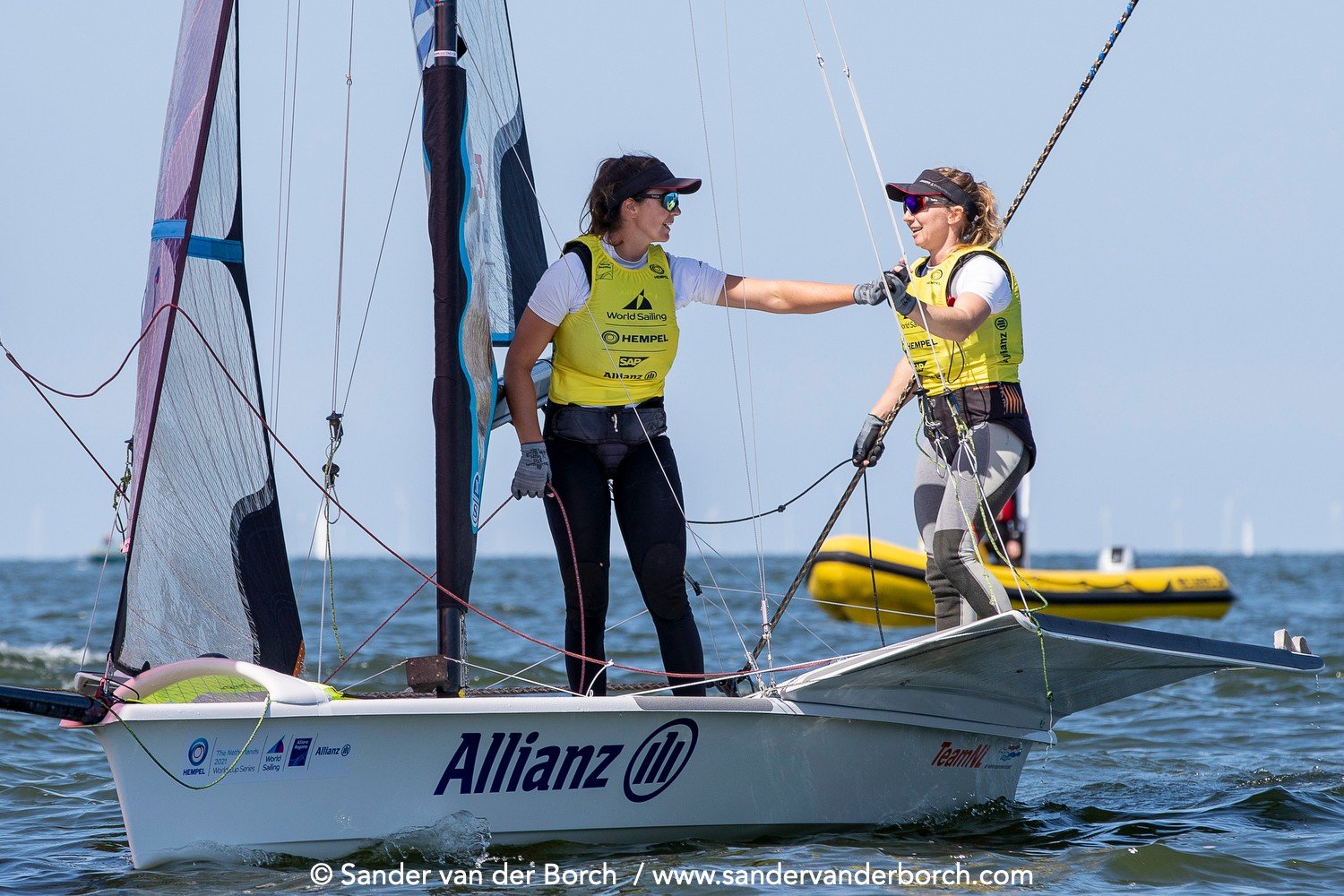 On home waters, Bart Lambriex & Pim van Vugt took top spot on a tiebreak in the 49er, while Annemiek Bekkering & Annette Duetz wrapped up a convincing victory in the 49erFX.

In stark contrast to yesterday, the wind reverted back to the light and tricky breeze seen earlier this week, with just 6-7 knots out on the course. There was a delay of around three hours to the scheduled start times for both fleets.

The 49ers set sail first, with scores tight amongst the top. Young German duo Jakob Meggendorfer & Andreas Spranger started the race in the yellow bibs with a two-point advantage over the Dutch.

French team Lucas Rual & Emile Amoros, who are also heading to Tokyo 2020 this summer, sat within striking distance in third – and a second-placed Medal Race finish, behind compatriots Kévin Fischer & Noé Delpech, was enough for them to seal bronze.

Lambriex & van Vugt crossed the line third, one position ahead of Meggendorger & Spranger, putting both teams level on points – and with the higher-placed Medal Race standing, victory went to the Dutch.

“It feels great – it was a very nice regatta, pretty close with some French teams and the Germans up until the end, so it was really good racing and we’re very happy with the win,” said Lambriex.

Talking through the Medal Race, van Vugt explained, “We had a little incident at the start but that was in our favour so that was good and we still did what we wanted to do.

“From then on we tried to stay ahead of the guys that came closer and closer. We managed to do that and it was all fine. We’re really happy with the result.”

Looking ahead to Tokyo 2020 in July, Lambriex added, “We’re going to do two weeks of training at home, we’ll have some weeks off and then we’ll fly out to Japan.”

The 49erFX fleet wasn’t quite as close, with Bekkering & Duetz taking an 11-point lead into the Medal Race, but in the tricky light winds, it was difficult to predict the outcome.

As it happened, the conditions made it even harder for the 10 boats to perfect their position on the startline, with a handful having to return and restart behind the rest of the fleet to avoid receiving an OCS.

Amongst a relatively young fleet, the experience of Bekkering & Duetz shone through, as they won the Medal Race to confirm gold, 22 points ahead of second place.

A seventh-placed finish for Marla Bergmann & Hanna Wille (GER) was good enough to keep hold of overall second for silver – and they were joined on the podium by team-mates Maru Scheel & Freya Feilcke, who crossed the finish line fourth ahead of their closest rivals to move into the top three for bronze.

Speaking after the podium ceremony, Duetz said, “It’s very nice, especially back home here in Medemblik, with family and friends out here to support us and cheer for us.

“It was a very exciting Medal Race; it was light breeze, onshore but still very unstable, and a big pressure difference on the racecourse, so also a big shift in the ranking.

“We were very happy to come away with a good result.”

“There was a younger fleet here, a bit different and we didn’t really know all of them, but it was fun – different strengths, and they surprised us at times, so that was really good,” added Bekkering.

“The conditions have been quite tricky, with a lot of shifts and different pressures, so it wasn’t boring!”

On their own preparations for this summer’s Olympic Games, Duetz said, “We’ll have a few days off, then next week we’ll train in Scheveningen so we’ll have a bit more racing there.

“We’ll do a final training camp before we head to Japan in July.”

Sailors outside the top ten in the 49er and 49erFX classes sailed one more fleet race today, to determine the final standings.

View the results in full here.

The next event in this year’s series is set to be announced in the coming weeks.

With the Sailing competition at the Tokyo 2020 Olympic Games set to start on 25 July, qualified athletes will be focusing their full attention on their final preparations.