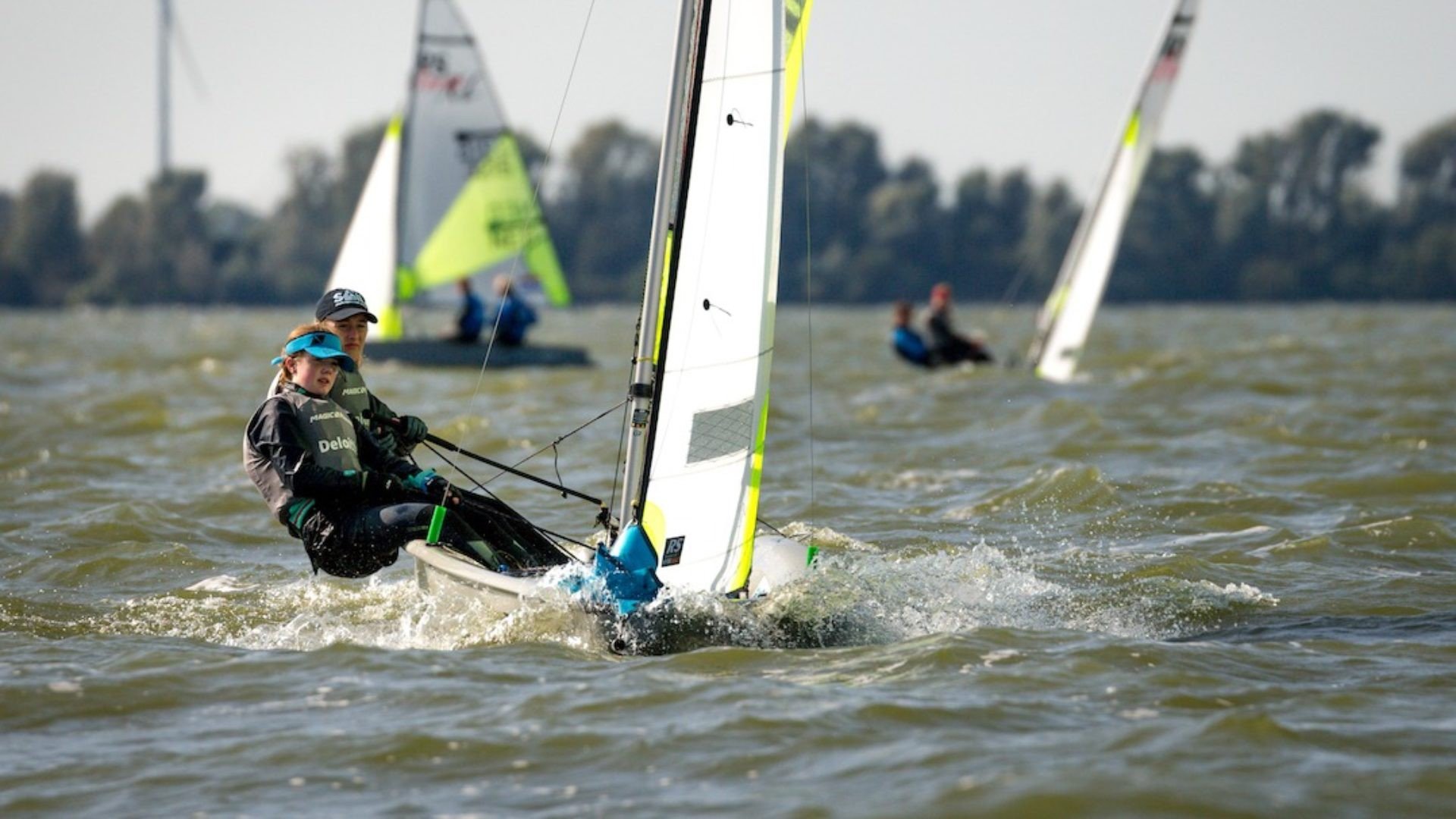 For three days the Open Dutch Sailing Championships were a joyful affair. After months of sitting still, without sailing competitions, the hundreds of participants were all smiles. The nine Dutch champions were also smiling on the podium. Thanks to the collective discipline of all participants, the efforts of all volunteers, the vision of the organisation and the Watersportverbond and the perfect sailing weather, these championships will go down in the books as sober and successful.

He owed it to his stand, but you still have to do it, win all eight matches. The sailor of Enkhuizer Watersportvereniging Almere (EWVA) was not always the first to cross the start line or first to reach the top mark because very experienced Finn sailors also participated, such as father Roy, Cees Scheurwater, Peter Peet, Wietze Zetzema and 38 others. But in the end Nicholas was the first to cross the finish line in all eight games to be crowned Dutch Champion unbeaten.

Nicholas Heiner was happy too. “It would be strange if you don’t win. But you have to make sure you sail smart and don’t take any risks…. and ultimately you have to rely on your speed. But a mistake or start too early, and you can throw it back completely. Yes, this is the first time that I have won unbeaten. You also don’t take any chances because you know that you can beat these men in the wind. In the wind, the differences are quite small, even with a lot of wind. But the big differences are for the wind. Wietze (Zetzema) and Roy (Heiner) made it quite difficult for me in such a first cruise. But that also makes the sport fun and that is what I want.”

Paul Hameeteman (17) also makes himself heard in Medemblik. Last week, the man from WV Zierikzee won the Kielerwoche. This talented and driven talent team sailor is in a class of its own in 2020. With this result, Hameeteman proves to be a worthy champion in a field with 44 participants.

Hameeteman said: “This is the first time I have won unbeaten. I am very happy with that, really cool. First Maxime was to participate but she dropped out with an injury. But I was confident that it would work out after the training sessions in recent months. I trained hard when Corona broke out. First at home alone on the Grevelingen and later at the beginning of April again with the talent team in Muiderzand. I was suddenly able to train five days a week because school was closed. Did I feel pressure? No. I go out on the water to sail the best I can but I am not concerned with the fact that I have to win. But winning is always fun.”

In the Laser Standard, Duko Bos was too strong for the rest of the fleet. Bos also owes it to his stand. The sailor of R.Z.V. Rotterdam is still looking for a half Olympic nomination and a country qualification to participate in the Olympic Games in Tokyo. In any case, he has the Dutch title and pennant in his pocket.

“I am very happy that I was able to win again after last year. More strong participants were registered in advance, but due to the latest Corona measures, many foreigners have dropped out. But then you still have to make it happen. My goal in advance was to start sharper, I was a bit too careful about that. So I learned that lesson and I am Dutch champion. What else do you want.”

Laura van den Acker (18) and Femke van den Berg (16) are representing the R&ZV Gouda. This team was by far the best in a field with 28 participants. Laura and Femke are now Dutch Champion for the second year in a row.

Laura explains: “The moment we were allowed to train again, we immediately started sailing with our coach Tijmen Beemster. Like us, he is also very happy. This year we had good opponents, but we managed to win again. I am one of the oldest in the class and now I have to leave because of my age. So this is also the last time, because we will now continue as a team in the 29-er.”

Yska Minsk Dutch champion in the Yngling for the seventh time

Yska Minsk sails on behalf of KWS Sneek together with Jaap Molenaar and Wouter Toornstra in the Yngling class. Minsk is one of the veterans in competitive sailing. Minsk has already won many titles in this three-man boat. We asked Minsk about his experiences.

“I think this is my 7th title since 1985 and I am also the helmsman who has been in the Yngling the longest. Yes, we are happy with every title and of course I do not do that myself but with these men. Together we are good for three titles. This is the first event since Corona. I haven’t sailed a meter. So we are very happy that it is possible again and then also in Medemblik, beautiful competition water and a great committee. Compliments are in order. ”

Korpershoek and his team sail on behalf of the DMTRA association and told afterwards. “We are the highest in the match racing world ranking. That makes you a bit of a favorite. And as a team we are also the most experienced in this Elliott in match racing. So that does put some pressure on our shoulders. That is why we were very happy that the first two days went well. But then everything starts again today. In the final the wind dropped. So then it becomes nail biting. But in the end convinced with a 3-0 win, very happy with that. ”

Jolbert van Dijk and Frank de Waard sail in the Formula 18 Catamaran class and compete for KNZ & RV de Maas in a field of 16 participants.

“We have been sailing together for 30 years and are sailing in this boat for the first time. Quarter ton truck, J24, J22 IMS IRC. We were looking for a nice class and bought this boat Ukraine in January, this is the first time that we have sailed with it and immediately became Dutch Champion. So a top event. ”

Dirk Lafleur of WSV de Zeevang won the Dutch Championship in the Contender class with 18 participants.

“I sailed well, had three beautiful days, super committee. Great event. I grew into it. I hadn’t trained beforehand, really sad. But I really missed all Contender sailors, but I don’t think they missed me haha, ”Dirk Lafleur concluded with a laugh.