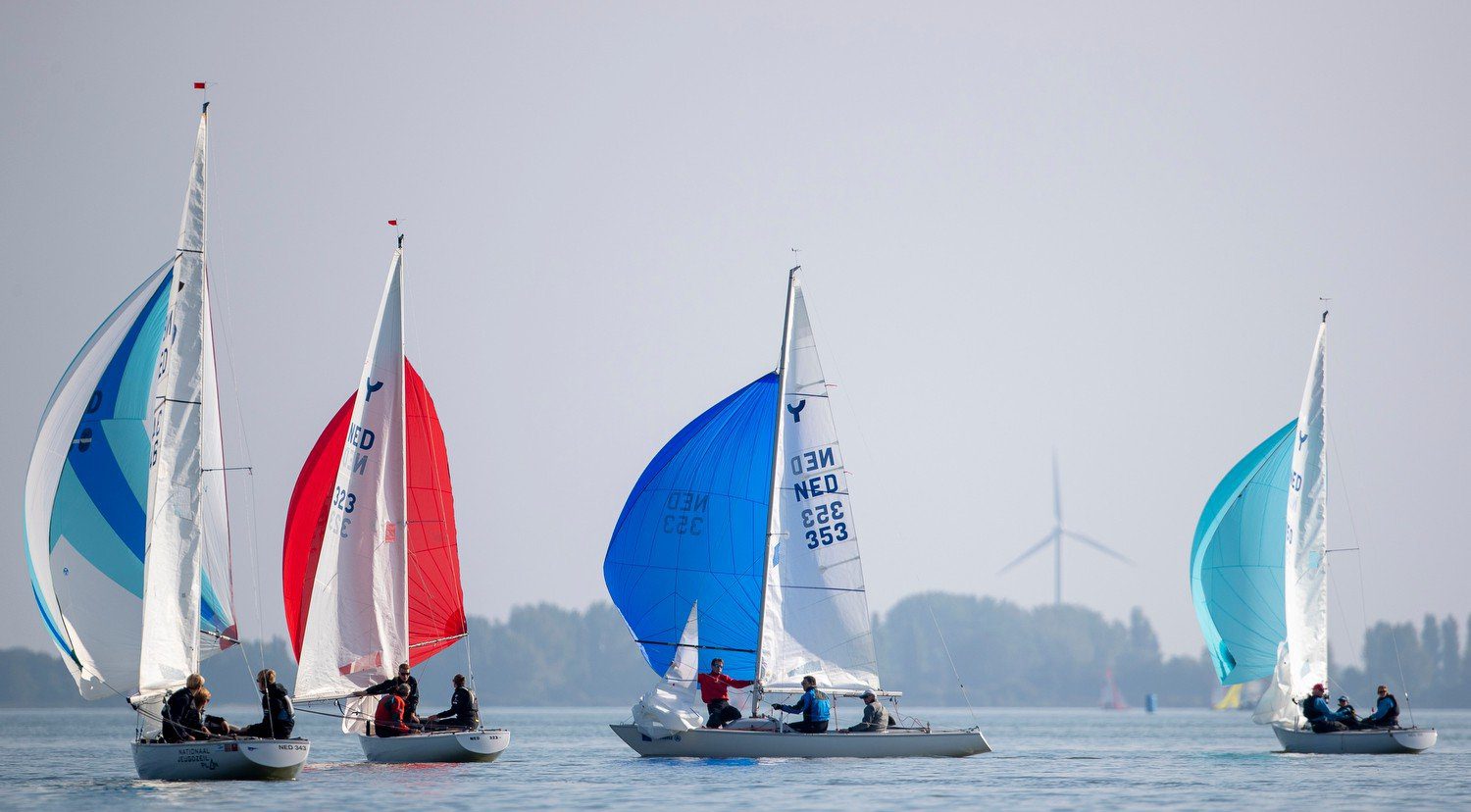 On the final day of the Allianz Regatta, the competitors were sent into the water by race directors Remco de Goederen and Rob Hoogstra around 14:00. Only just before the deadline of 16.00 hours, the wind picked up enough to sail a fair race. Eventually, in six classes, the coveted champion’s pennant of the Watersportverbond was awarded; in the ILCA 6, ILCA 7, 29er, Contender, SB 20 and Matchracing and in three youth classes, qualification for the Youth World Championship, in Oman later this year, was determined.

ILCA 6 Open Dutch Championships and qualification Youth World Cup
The best Laser Radial (ILCA6) sailor in the men’s category is Hidde Schraffordt (15) of WV de Vrijbuiter and in the girls category is Roos Wind (16) of KWVL. Schraffordt may also call himself the best in the Netherlands for a year as winner of the ILCA 6 fleet.

The Allianz Regatta is also the qualifier for the World Sailing Youth World Cup U19 in Oman later this year. In other words, with this result Hidde Schraffordt and Roos Wind also grab the exclusive ticket to participate in that World Championship in Mussanah, Oman in the ILCA 6.

Roos Wind wins the last race of the championship and gives the following explanation: “Just before the start, I saw the new wind coming from the right, while the pin was favourable. At that moment I decided to sail my own race and not pay attention to Marissa (IJben ed.). I did make a defensive pass to the left where Marissa was. It was a good choice. I am looking forward to Oman, especially the experience,” Wind concluded.

ILCA 7 Open Dutch Championship
In the Laser Standard (ILCA 7) the experienced Eduardo van Vianen of WSV de Braassemmeer wins. For Van Vianen this is not his first championship. On the second place Lorenzo Ceretelli from Italy finishes and the also very experienced and ex-Olympic Serge Kats from the RZV wins again a medal, this time the bronze at a Open Dutch Championship in the Laser. Inquiring with Kats reveals that he has lost count and does not know how many times he has been on the podium at a national championship. It is certainly an impressive number.

Contender Open Dutch Championship
Mark Thorborg of KR&ZV Het Spaarne wins the Dutch Championship in the Contender. For this he not only has to beat the entire fleet but also his two brothers, Rik and Mark. The brothers have been sailing together against each other for years. For the simple reason that they prefer to sail Contender, and that is only possible against each other. Winfred Westerman comes second and Utz Müller from Germany comes third.

Matchracing Open Dutch Championships
Matchracing is a bit of a mix of experienced match racers and olympians. Renee Groeneveld, Lobke Berkhout and Marije Kampen are allowed to call themselves Dutch matchrace champions for a year. This experienced trio eventually manages to win the most races. With 14 wins, the three ladies beat the well-oiled matchrace team of Dirk Jan Korpershoek. On a third place ends the team of Bart Lambriex, who represented the Netherlands in the 49er at the Tokyo Olympics last summer. On this occasion, Lambriex sails with his English 49er coach Rick Peacock.

Olivier Jaquet and Femme Rijk used to sail with other partners in the Nacra15. But their regular mates have become too old to participate in the Youth World Championships. Just before the Allianz Regatta they decided to put their heads together and sail this qualification together. And with success. Jaquet, member of sailing club KR&ZV de Maas, qualified for the youth WC for the second time. For Femme Rijk, member of WSV De Braassem, it is the first time.