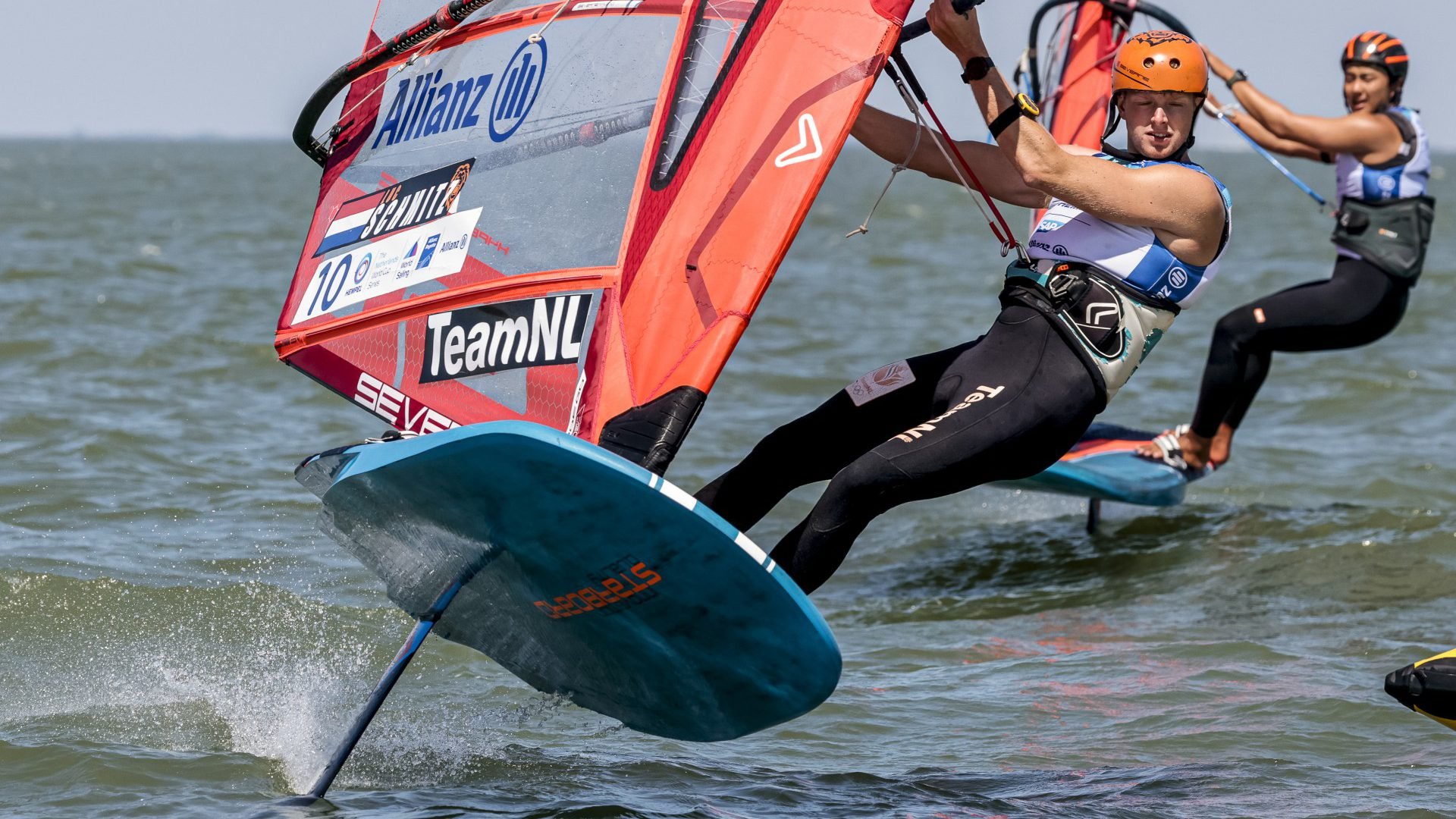 On the Bataviastrand in Lelystad, there is a relaxed atmosphere. The iQFoilers have just come off the water and the kitefoilers are just entering the water for their third day. The foilers are sailing the Allianz Regatta, part of the Hempel World Cup. While the rest of the sailors sail from Almere, these two new Olympic disciplines sail in Lelystad.

The iQFoiling is the replacement of the traditional windsurfing on the RS:X. The Olympic surfers only switched to this foiling discipline after the Tokyo Games. Other windsurfers were able to make the switch earlier and thus have a longer preparation for the Games in Marseille.

The Dutch men’s team iQFoilers in any case fill the complete top 3 after the first 8 matches. However, these results will not really matter anymore before the finals on Sunday. Then it is all about the top 12 and a knockout race follows in quarter-finals, semi-finals and finally the final. A completely different format compared to RS:X sailing and in fact every other sailing event in Olympic sailing.
Luc Schmitz, currently in 9th position, about this new format: “We do not agree 100%, but it is more interesting for the public. It is easier to follow, the point system is much simpler. In addition, you no longer have to be certain of gold before the final race, as was the case with both Dorian and Kiran during their Olympics.”

“Then I’m going to play devil’s advocate for a moment,” responds Max Castelein, currently in first place. “There is no other Olympic sport in which the winner is not known until the last day. In sailing, you often see that the battle is already decided before the final race. Although I do find it a very punitive form that only the last day really counts. But it is in line with the other Olympic sports.”

The new format is causing a stir, especially in the larger countries that have a lot of top performances in windsurfing. The smaller countries now see this as an opportunity to still win if they make it into the top 10. That makes it a risky business, it’s all or nothing.

Hidde van der Meer has only just joined the adult talent team. He experienced himself how punishing this new format is. “Recently, I was dominating the finals at a major event. I fell at an upper buoy and lost everything immediately, which is very disappointing. Everyone really goes in with an all or nothing mentality, that’s how they sail.”

Also former Olympic RS:Xer Lilian de Geus finds the format special, she says. “It’s not necessarily the case that the best of the week wins. It’s especially tricky when you’ve had a really good week, in the end it all comes down to the last race. I try to adjust to that now.” 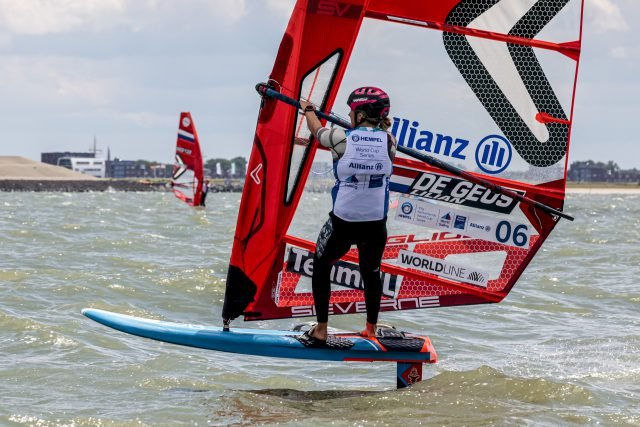 Switching to iQFoil was tough for Lilian

The format is not the only difference with the RS:X. Lilian has only recently made the switch, while the men have been sailing fulltime for several years now. For Lilian, the weight was particularly an issue. “It has been very tough, I have now gained 8 kilos, which is quite a lot for a woman. I have eaten a lot of calories, but I have tried to do this in a healthy way. Meanwhile, I am more accustomed to my new weight.”

For Lilian, this World Cup is her second event at the iQFoil since the Games. During the Princess Sofia Cup she withdrew because she was still recovering from COVID19, so the EC last month was only her first event. “It strikes me that the level of the Olympians is not that different from the iQFoilers who have been working full time for some time. During the EC I was a bit behind in my starts, but that is going better now. The most important thing in this class is that you have the gear tuned properly, the races and the game remain the same.”

Competitors and friends at the same time

The Dutch guys see this too. They have been training together on the foils for a while now, but this week they see that the former RS:X surfers are also coming along well. Max: “The Frenchman Louis Giard is a very good former RS:Xer, this week he is continuously in the top. But I think our biggest competition is between ourselves. The strength of our group is that we are fairly consistently in the top 7. We have actually made a kind of Dutch Championship.

A Dutch championship with a Belgian in the middle. Thomas Broucke has been training with the Dutch guys for three years and also sailed on the RS:X before. “The game is the same, but it all goes much faster. Downwind you need to keep enough pressure and stay in a gust, if you go out of it you lose all your speed. In the windshifts you really have to stay alert, this was also the case on the RS:X, but there was much more speed difference. On the iQFoil everyone goes at about the same speed.”

On the water the boys are each other’s biggest competitors, Max: “We can drink each other’s blood when we go into a race. But we can also let go of that as soon as we get off the water.”

Mathieu Koops, coach of the boys, agrees. “This group has grown from the talents together into the iQFoil. It has really become a close-knit team. I myself started foiling a few years ago, of course I’m not as fast as these guys, but I do understand the game.”

The iQFoilers are still sailing from Bataviastrand Lelystad until Sunday. Sunday the final races will be sailed.