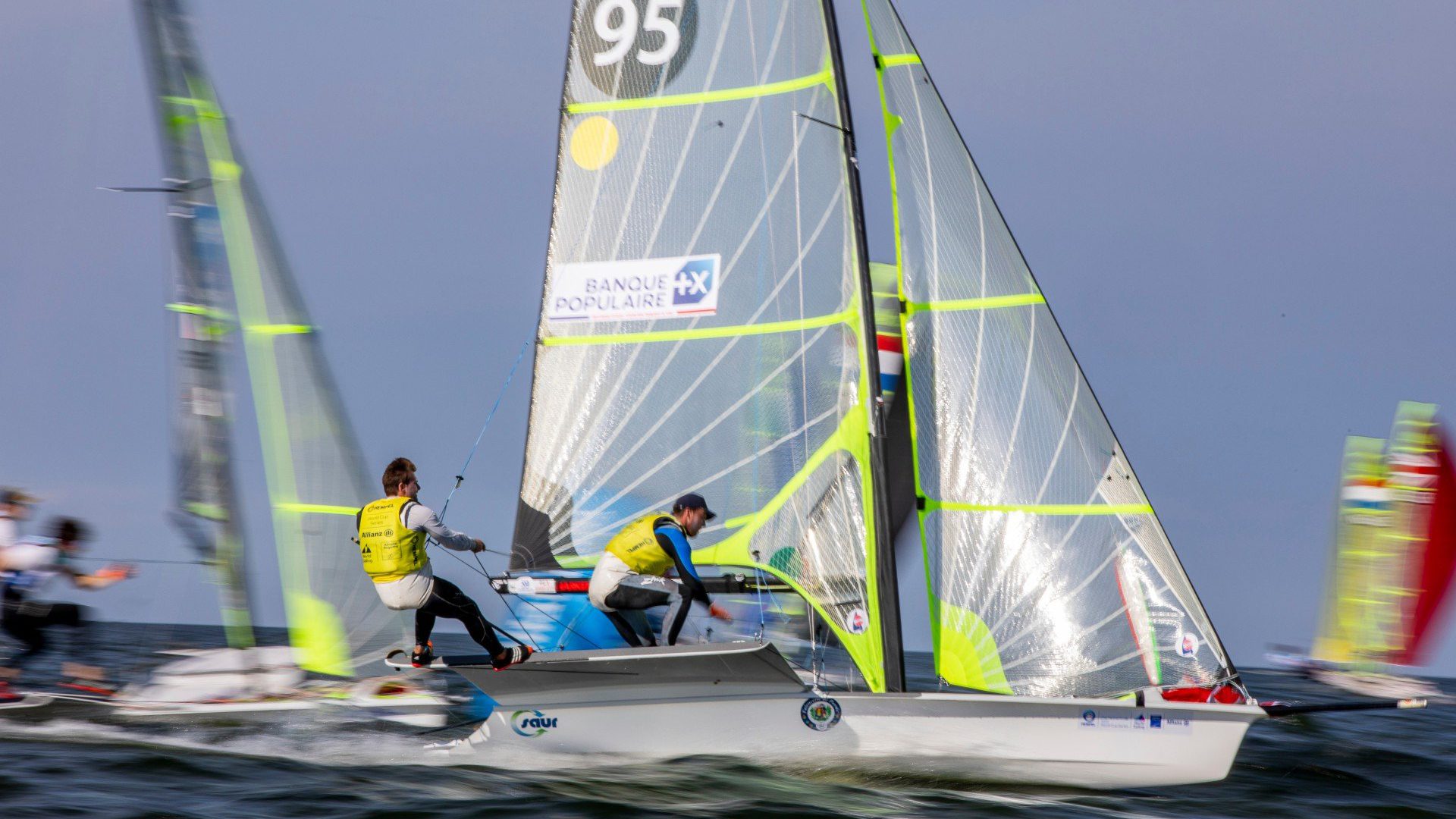 It was a contrasting day for the 49er and the 49erFX at the Hempel World Cup Series – Allianz Regatta in Medemblik, The Netherlands as sailors raced in two types of conditions.

An early stable, onshore breeze was prevalent for the first part of the day before shifting to an offshore breeze that brought light patches, plenty of shifts and the occasional gust to test the competitors.

Annemiek Bekkering and Annette Duetz (NED) held on to their lead in the 18-boat 49erFX fleet and their teammates, Bart Lambriex and Pim van Vugt, advanced to the top of the leaderboard in the 31-boat 49er fleet.

Just two out of three races were completed in the 49erFX, and Bekkering and Duetz extended their lead with a third and a race win.

Meanwhile, the new Dutch pairing of Odile van Aanholt and Emma Siewers grabbed their first race win of the week and now sit in second.

Describing their day right after racing, van Aanholt exclaimed, “It was fun. Challenging.”

The pair followed up their victory with an eighth, which they discard, and are a point clear of Marla Bergmann and Hanna Wille (GER).

van Aanholt continued, “We were looking to see where the wind would come from next. It kept us on our toes. We weren’t expecting the north easterly that came in but grateful it did.

“We had a good start and focused on doing our own thing and it worked for us.

“When you get to a location like Palma, sailors already know what they have to do and what’s going to happen. Here [in Medemblik] you never kind of know and always have to try and figure out the next step.”

Van Aanholt campaigned for Tokyo 2020 with Marieke Jongens but narrowly missed out on selection, with Bekkering and Duetz doing enough to take the spot.

The partnership with Siewers is fresh, new and exciting and Medemblik marks the start of their journey. “We’re a relatively new team,” commented van Aanholt. “We teamed up in December and our aim is to do well at the Oman World Championship, so everything we learn here we’ll look to take with us.

“We want to do the best we can. We’re learning a lot in the light winds.”

In the 49er, Lambriex and van Vugt started the day with an 11th but hit back with two race wins, and they put that down to the change in conditions.

Lambriex explained, “It was quite a weird day because we started with a stable onshore breeze. We did the first race but then the wind came from offshore so it was a bit more shifty and gusty. That went a bit better for us.”

Overnight leaders Lucas Rual and Emile Amoros (FRA) struggled in comparison to their opening day and picked up a 10-10-(21) scoreline that relegates them to third.

Kevin Fischer Guillou and Noé Delpech (FRA) won the first race of the day and are fourth.