Yanne Broers goes for the Dutch 29er Championship in Medemblik. She was already the best in the Optimist, now she has to prove it in the 29er. Earlier, she was twice second, how will she prepare for that gold medal?

Becoming the best in the Netherlands in your sailing class is something every sailor dreams of. Fortunately, every year there is the chance to become the best in one of the Dutch championships. This weekend (from 8 to 10 October), one of the largest combined championships is on the agenda. The Allianz Regatta Open Dutch Sailing Championships where in no less than 10 different classes the national title will be fought for. Among others Yanne Broers in the 29er.

Yanne is sailing in this class since the end of 2019, before that she was one of the better Optimist sailors in the Netherlands. This Dutch Championship 29er she sails together with Michiel Dam. We asked her a few questions about this championship, for this we first went back to her Optimist days.

In the Optimist you already stood out, what prizes have you won here?
“In 2019 I came first at the Garda Meeting in Garda, Italy. And the World Championships in Cyprus in 2018, I came fourth. Here I was the first of the Dutch. Another first place was in Bermuda during the Junior Gold Cup, overall I came fourth, but from the girls I was number 1.

“In addition, I have also won the Dutch Championship in the Optimist twice.”

You switched to the 29er, why this class?
“My first event in the 29er was also the Open Dutch Sailing Championship in September 2019, when I had just switched. It seemed like a really nice boat anyway. And for the Laser I was too light. The 29er fits me better in terms of length and weight. The balance in this boat is also very nice, if it goes well, you immediately notice how fast the boat goes.”

“It took some getting used to to suddenly sailing with a crew. In the Optimist you sail alone, of course. You also have to find the right crew. I have been sailing with Michiel Dam for a month now, and luckily I have a good click with him.”

What makes you such a good skipper?
“I have a good feeling in the boat, I know very well how to make the boat go fast. My time in the Optimist has also made me good at tactics. I know how to make a boat go in front of the field. I have never crewed in races. I did once during training, to experience what that’s like.”

What achievements have you already made in the 29er?
“Last month, I finished sixth together with Michiel at the Eurocup in Kiel. Just before that, I sailed the World Championship in Valencia together with Dolf Hendrikse. Here we finished as 26th (and first Dutch team). This was one of the first major events in which I participated in the 29er. That was super fun to experience. Dolf is an experienced crew in this class, it was really a very educational and fun experience.” 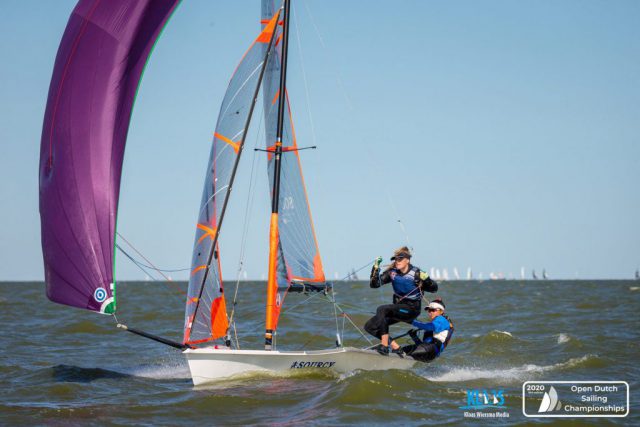 And how will you win this battle?
“We are keeping a close eye on the weather forecast. It seems favourable now with light weather, we are a light crew, so that is in our advantage. Our biggest competitors next weekend are Robbert Huisman with Frank Boer and Olaf Ganzevles with Stijn Gast, they are both very good teams.”